The Parish Church of All Saints 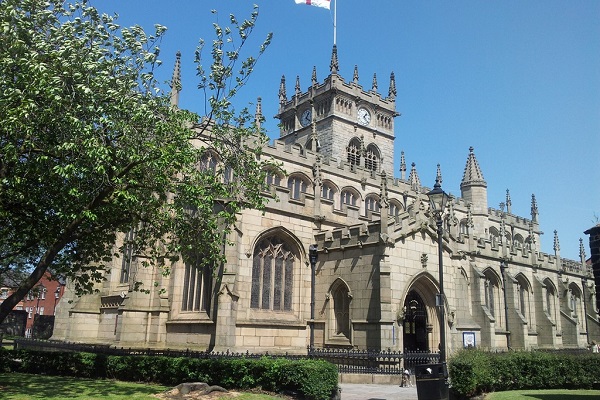 The Church stands on the crest of a hill in the centre of Wigan. Most of the present structure was erected between 1845 and 1850, when the Church was almost entirely rebuilt. It was a copy of the Church which was taken down then, which seems to have dated in the main from the later Middle Ages, though parts of the tower and perhaps other fragments were earlier.

Since the rebuilding three restorations have been necessary in 1898 and 1947 and more recently 2006.
This restoration began in the early 1990's when the copper on the Nave roof needed to be replaced. The acid rain in the atmosphere had over the years eaten away at the copper, it was replaced by a new covering of stainless steel.

The Parish Church of All Saints Wigan is by far the oldest church in Wigan but when it was founded and when the Christian religion was first established in Wigan is unknown.

The earliest possible mention of a church at Wigan occurs in the Domesday Survey of 1086. In describing what is now South Lancashire, the King's Commissioners noted that in King Edward the Confessor's time (1042-1066) the Church of the Manor of Newton-in-Makerfield was endowed with one carucate of land.

Wigan Church is not specifically mentioned but there are very strong reasons for assuming that it can be identified as 'the church of the Manor of Newton'. If this is the case, then Wigan Parish Church was founded at least as early as the reign of Edward the Confessor and probably even earlier and so can claim to be one of Lancashire's oldest parish churches.

It was beyond any doubt established by 1199, when King John appointed Adam de Freckleton perpetual vicar of the church of Wigan at the request of Ranulf, Treasurer of Wigan, the first known Rector of Wigan.