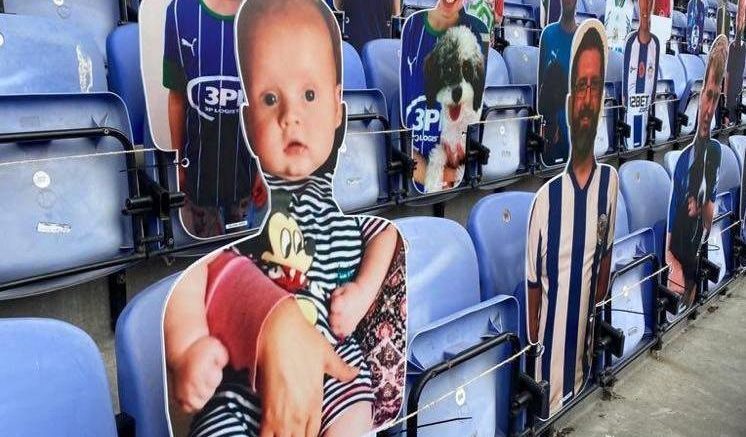 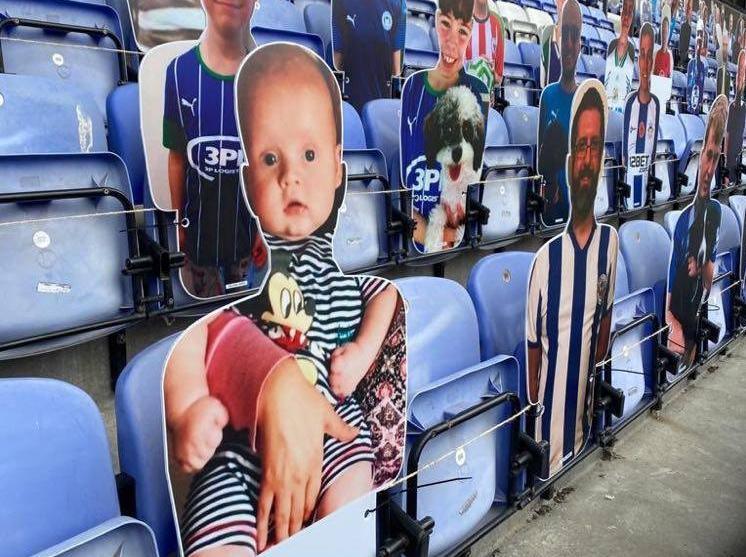 Baby Jack Stout was destined to become a Wigan Athletic fan. His parents, both loyal Latics supporters, met at a match during the club’s historic FA Cup run in 2013. They would welcome Jack into the world two years later in March 2015.

Tragically, mum Christine Lamb would never have the chance to take Jack, her fourth child, to see her beloved club play. He was just five months old when he died in August 2015 from Sudden Infant Death Syndrome.

But on Saturday, June 27 2020, almost five years since she lost her little boy, Christine finally got to see Jack cheering on his team at the DW Stadium.

The club gave fans the chance to have a cardboard cut-out of themselves placed in the stands, for the behind closed doors home fixture against Blackburn Rovers.

Jack was among 400 cut-outs of supporters and Latics legends that filled the DW’s empty seats, for the clash which Latics won 2-0.

For mum-of-three Christine, it was a heartwarming moment.

“It was so emotional,” the 32-year-old from Beech Hill told Wigan Today.

Baby Jack in the stands for Wigan v Blackburn

“I don’t think I stopped crying all day.”

“We’re all massive Latics fans. I was speaking to my kids the other morning. I said ‘they’re doing these cardboard cut-outs’. At first they had said ‘shall we get our dogs put on them?’ And then they said we should do Jack, because he never actually got the chance to go to a Latics game.

“I thought it was a good idea. It got him his chance, through the cardboard cut-out, to finally go.”

The club quickly found out about the story behind Jack’s cut-out, and generously refunded Christine. She donated the money straight back to the Wigan Athletic Community Trust in Jack’s memory.

“The community trust does help a lot of people in the area,” she said.

“A lot of people are struggling with being furloughed and other stuff. It’s a nice thing what they’re doing, like helping the vulnerable who can’t leave the house.”

After tweeting about the club’s generous offer, Christine woke up the following day to discover her post had gone viral. Hundreds of social media users sent messages of support to Christine, including many rival club supporters.

Current club captain Sam Morsy was also among those to pay tribute to Jack, saying: “Hope we did him proud today” after taking all three points.

Christine said: “I went to bed and when I woke up, the tweet had gone completely out of control!

“When Sam Morsy tweeted, it was just great. He’s a genuinely nice person. To have that tweet from our captain was amazing.”

She tweeted: “Absolutely overwhelmed with the response, thank you to everyone for your lovely comments & to everyone who has donated to our chosen charity.. Shine bright my boy”.

Christine has also been raising money for Joseph’s Goal, a charity set up by Wigan Today’s Latics reporter Paul Kendrick.

The charity is named after Paul’s son Joseph, who has a rare genetic disorder called Non-Ketotic Hyperglycinemia (NKH). It affects one in 60,000 new-borns. The condition is so serious that less than 500 people in the world are living with it. Joseph’s Goal has been set up to raise funds and awareness into NKH.