Steven McMyler died in the grounds of Wigan Parish Church on the evening of August 6 last year. The 34-year-old was the victim of an alleged plot to rob him of an expensive gold watch. 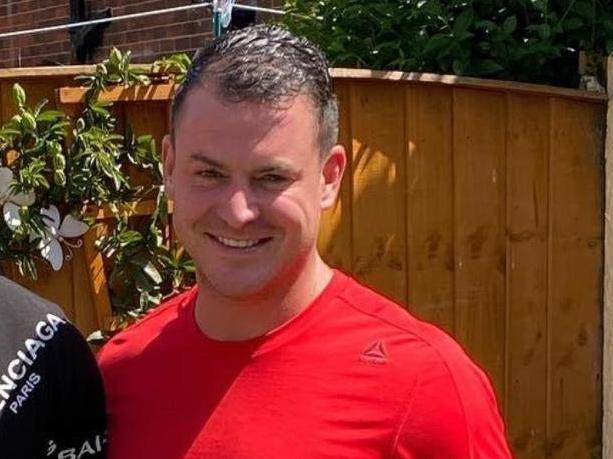 Prosecutors say that Lewis Peake, 29 at the time, recruited four males from Merseyside – Jordan Short, 20, Michael Wilson, 20 and two youths aged 14 and 17 – to assault Mr McMyler, before events took a turn and the group turned on Peake himself and hit him over the head with a glass bottle.

Police outside the church following the events of August 6

Today (April 22), jurors at Manchester Crown Square heard from a couple who witnessed the four males grinning and laughing nervously as they ran away from the church gardens just moments after Mr McMyler was attacked.

Logan Armstrong told the court his eyes were “drawn straight away” to a group of males as he walked down King Street West towards Wallgate train station, where he was meeting his girlfriend Hannah Houghton.

“From previous jobs I have been very observant of people looking a certain way, so my eyes were drawn to them straight away,” he told prosecutor Mr Ford QC.

After meeting Ms Houghton, the couple then began walking home back down King Street West, when they witnessed the same four males Mr Armstrong had seen earlier. They ran out of the Parish Church gardens, towards Dorning Street.

Mr Armstrong said: “They were grinning, like they had high adrenaline.

“Not laughing – it was like something serious had just happened.

“I thought they had smashed a window or something.”

Ms Houghton told the jury that, as the four males ran away, one of them shouted “come on” to another.

The trial is being heard at Manchester Crown Square

When asked by Mr Ford QC to describe the shout, she said: “It seemed quite anxious. I wouldn’t say panicked or really serious, because there was a bit of laughter as they were saying it.”

She said of the laugh: “It was kind of like a nervous chuckle. Almost like the adrenaline, like something has just happened but not too serious.”

The couple lost sight of the group as they ran away down Dorning Street, past Coops Foyer and the Uncle Joes Mint Balls factory. But as they continued down the same street moments later, two of the group re-appeared some distance behind them, and ran past them in the direction of Frog Lane.

One of the males later approached a father who was picking up his partner and children from an address in Frog Lane. In a statement read to the court, he said the male offered him up to £100 to drive him back to Kirkby. When he refused the offer, the male repeatedly asked him for a taxi company number instead, which he obliged.

The group then booked a taxi and were taken to Kirkby.

The trial also heard details of Peake’s movements in the lead up to and aftermath of the alleged murder.

Giving evidence from behind screens, a young woman with whom Peake had been staying alongside a mutual friend, told the jury that the trio had been out drinking on the afternoon of August 6.

But the pair left Peake and went to another pub together after he started “annoying us”, she said.

While they were still in Wigan town centre, the events at Wigan Parish Church unfolded.

After walking away with Mr McMyler’s suitcase – which he had been carrying since arriving back in Wigan from London earlier that day – Peake headed down Library Street, where two ladies noticed the injury to his head, and flagged down a passing ambulance.

The paramedics called the police as a precaution, but when they arrived, Peake refused to be taken to hospital, and did not want to report the incident to the officers.

The ambulance crew agreed to take Peake home instead, and he directed them to the address in Standish where he had been staying with the two friends he had been out with.

Peake’s two friends arrived back at the property later to find the ambulance still outside.

“I saw Lewis was at the house, my mum was upstairs, and there were paramedics were there,” the woman told the court.

“Lewis had been brought home by them, he had glass in his head and he was bleeding,”

“He said he’s been assaulted, he said he’s never been hit as hard. I was saying ‘go with the paramedics to the hospital’.

“The paramedics were trying to persuade him to go and he wouldn’t go.”

Later that evening, police arrived at the address, at which point Peake allegedly tried to escape via the back garden.

The woman said: “The police arrived. I thought it was because Lewis had been assaulted.

“I went to open the door and they ran past me, through the house. I was shocked.

“Lewis had run off through the back garden and tried to jump over a fence.”

Peake, of James Street, Little Lever, Bolton; Wilson, of Northfield Close, Kirkby, and the two youths, who cannot be identified for legal reasons, all deny murder, an alternative count of manslaughter and conspiracy to rob.

Jordan Short, 20, of Rushey Hey Road , Kirkby – is not being tried with the other suspects to being unwell, and is due to face court at a later date. He too denies murder, manslaughter and conspiracy to rob.

Thanks for reading. If you value what we do and are able to support us, a digital subscription is just £1 for your first month. Try us today by clicking here and viewing our offers.

Remembering the road to Euro 2020 final in pictures

Revealed: the most expensive areas of Wigan in which to buy a home